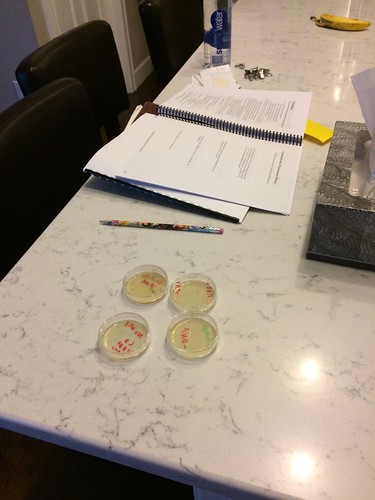 Alas… those were the days, when all I had to do was grow bacteria in the kitchen…

One: It began like any other home science experiment: we had almost all the pieces needed, and I figured I could use the substitutions in the teacher’s manual without a problem. (That might have been my first mistake.)

We started with a 9-V battery and some wire. And a metal Allen wrench.

The goal: build an electromagnet.

Two: We followed the directions, taping the wire to both ends of the 9-V battery and coiling it around the wrench. But it wouldn’t magnetize.

Three: I’m so tired of science experiments that don’t work. It’s happened so many times that the kids were ready to give up, as one does, but I was having nothing of that.

I knew the battery was working, because once we connected the circuit, the battery got hot. But the Allen wrench wouldn’t pick up any of the paper clips. So I pushed the kids a little harder: what could the problem be?

Four: We substituted out the wire. No change.

Five: We tested a different magnet on the paperclips. The fridge magnet picked up paper clips like… well, as it does.

Which left the battery.

Six: I happened to have this 12-V battery lying around. 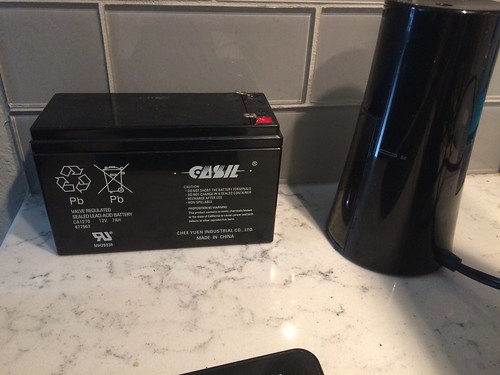 I believe this is the key to having successful science and engineering experiences at home: have a bunch of stuff lying around. It’s impossible to have a clutter-free house and a successful home science environment. The battery may or may not have been part of our old security system, we aren’t sure. But anyway, there it was, just sitting on top of the freezer. So I connected it.

The first time I tried to wrap the wire around the battery terminals, it blew sparks and I felt the charge from my fingers all the way down to my ankle. Whoa. Okay, the battery worked.

The kids were all for stopping at that point, but I was going to show them how science requires perseverance! And as Thomas Edison said, ‘I have not failed. I’ve just found 10000 ways that won’t work.” We were going to keep trying.

If I’d been a good homeschool mom, I would have taken a picture.  Instead, I unclipped it and smothered the fire.  We went back to the 9-V battery and a smaller screwdriver for the Allen wrench.

Success! Not only did we pick up a bunch of paperclips (this is meaningful work here!), my children developed a healthy fear of perseverance. When Sam asked them what they learned that day, they said, “We learned it’s not safe to do science experiments with Mommy.”

I’m counting this one as a win. And because the battery can’t be thrown away in the regular trash, it will still be hanging around my house until I need it the next time.

Be sure to check out Kelly’s site for more Quick Takes!