While the girls’ favorite things were shopping and Harry Potter at Warner Brother Studios, the boys had very different tastes.

We happened to be traveling during the 50th anniversary of Star Trek (the original TV show), and the BBC was having a Star Trek marathon.  Owen loved this and spent a fair bit of time watching Star Trek, mostly with his grandparents.  While it killed me to think of our traveling to another continent for him to watch TV, it was really the vacation he wanted, plus awesome time with his grandparents.  So I shut up and let them all enjoy it.

Jonah, less interested in Star Trek, loved the British Museum.  We all did, really, but he was the only one who wanted to go twice.  When I came back from my morning alone at Kew Gardens, he and I hopped on the Tube and went back to the museum together.

Here he is being one of the heads in the progression of Curls Through the Ages (not the actual name of the exhibit): 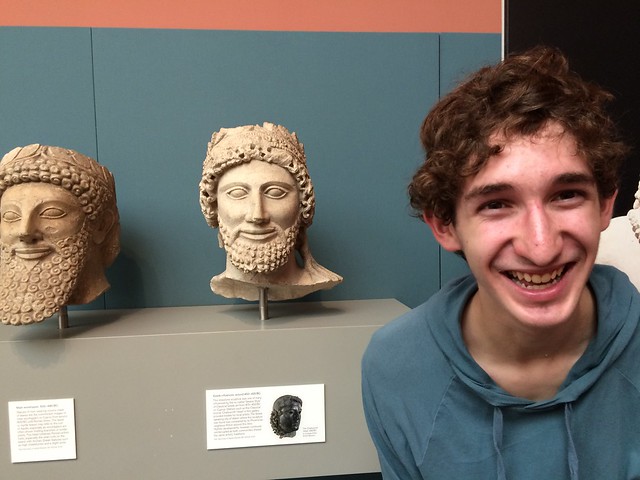 Another highlight for him was the interactive history at the Tower of London.  He and Owen were both drawn into the action. 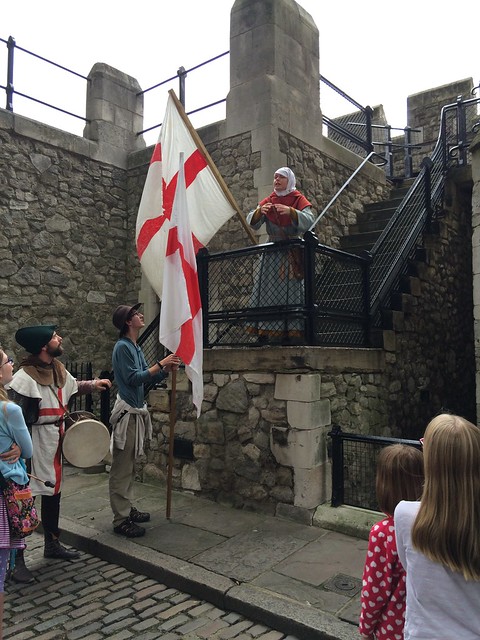 The three of us went on the Cutty Sark, and the whole family enjoyed the National Maritime Museum at Greenwich. 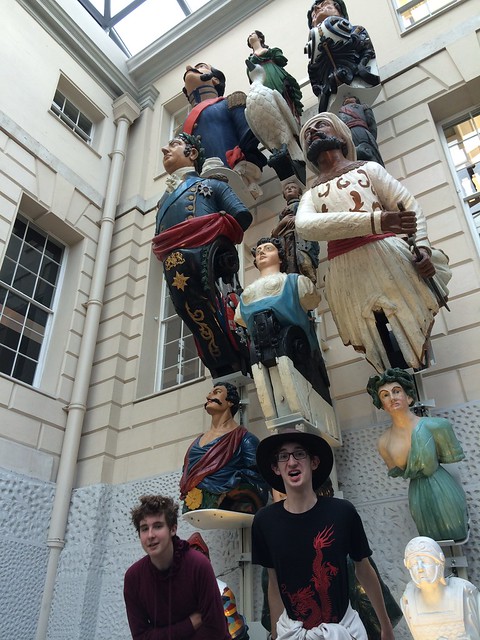 Jonah is definitely more a museum-guy than Owen, but I think there was enough down time (a.k.a Star Trek) to balance it out for him.

I highly recommend the boat tour from Westminster Bridge to Greenwich, though I’m glad we only went one way. 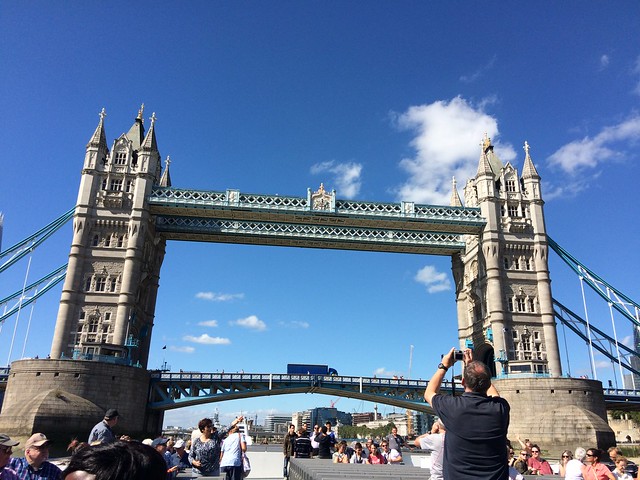 Here are the other posts on our London trip, if you missed them:

My tips for planning a London vacation with kids

In which I turn into a crazy fan girl and more.

Not everyone in my family likes to plan their vacations the same way. We have both people who make list months in advance and like to know what they’re doing every moment, and folks who are less structured.  My favorite vacations are the ones that included well-laid plans AND unexpected delights.

We managed to hit many of the sites on our lists, and we missed a few. (National Gallery and Westminster Palace: I’ll see you next time.)  But we also received gifts of completely unanticipated fun.

In the Heights.  We bought tickets for this show (one of our favorites) months ago, and then, because the London run is being extended they closed the show early to rehearse a new cast.  Our night was one of the canceled ones, but they gave us an option to change our tickets for the closing night.  We almost didn’t, because if the show ran at all late, we’d be left without Tube/bus to get back to our house. After hemming and hawing, we managed to get 5 tickets instead of our previous 8.  And I’m so glad we did, because after the producer got up to thank everyone for making the production a success, he introduced Lin-Manuel Miranda who got up and gave a speech.

And yes, I instantly turned from ordinary, middle-aged theater-goer into Raving Superfan. In fact, everyone in the entire theater did. I can’t figure out how to upload my videos of his wonderful talk (about home and identity, the themes of this fantastic, energetic show), but I have this really grainy fan photo. And I’ll try not to talk about it (much) the next time we get together. You’re welcome. 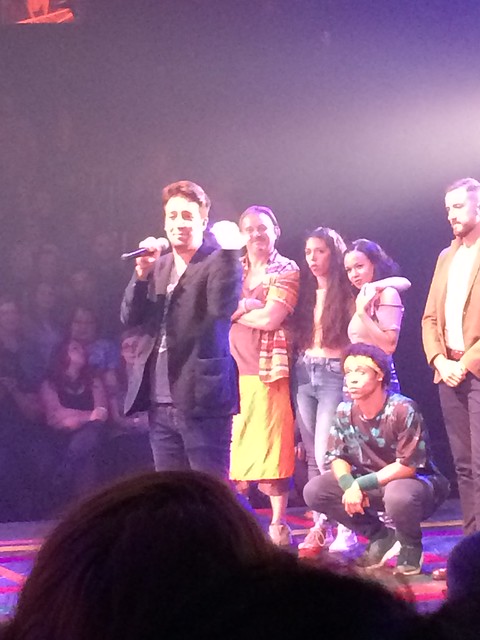 We were in London for two Sundays and worshiped twice at Westminster Abbey. Obviously, it’s an amazing setting, and the choir sang beautifully, but the best part was partaking in the shared liturgy. The lectionary readings took up right where our church had left off the previous week, and the service- straight out of the Book of Common Prayer- was so entirely familiar to the kids, I think none of them thought twice about our being in England. That moment of commonality, of home, was a treasure. 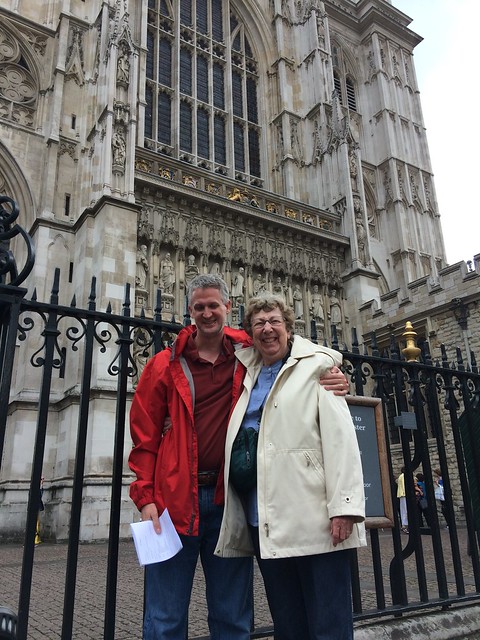 Our final Sunday, we planned to meet my parents for tea after church . However, all the streets around Trafalgar Square were blocked off for the Tour of Britain bike race.

Had I had this handy map at the time, I would have stayed west of the southern spoke of the race, but instead we walked the east side of Whitehall and then had to cross the route eight hundred times (more or less) to get to Fortnum and Mason’s on Piccadilly. (No, that wasn’t the awesome part.) An hour and a half later, when we finally made it to Piccadilly by crossing the route at every Tube station we could find, the road was blocked to all but foot traffic, and we had a great time messing around in the middle of the road, making slo-mo videos a la Michael Bay’s Apocalypse. 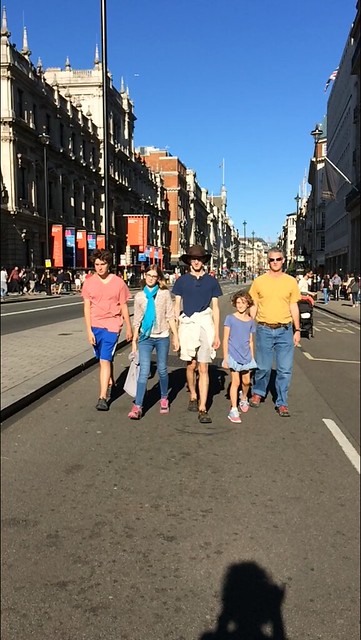 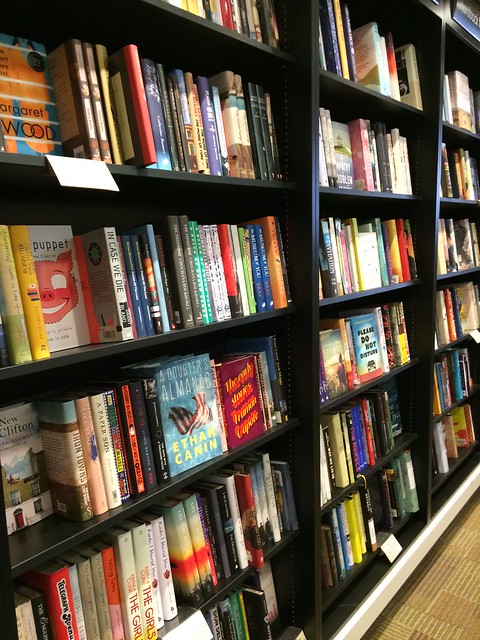 Of course, tea with grandparents and crazy ice cream sundaes was awesome, and any day in a bookstore is a good day, but the unstructured nature of that day was extra special. 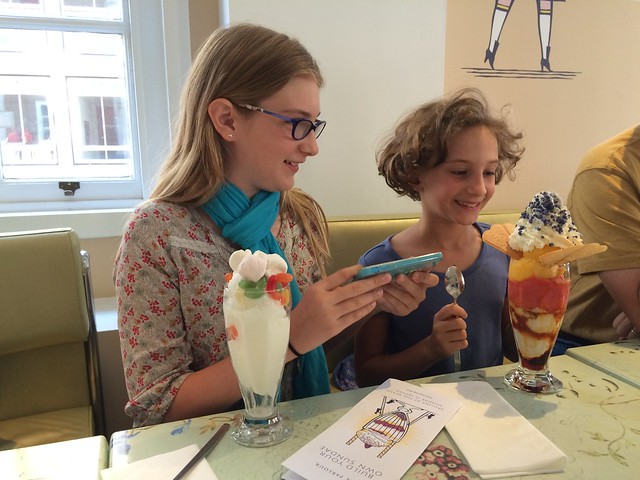 Do you have a favorite moment of unexpected fun on a recent vacation? Please share in the comments!

The girls’ favorite days on our trip were: 1) the day spent at Universal Studios looking at all the rooms, costumes, and paraphernalia from the Harry Potter movies, and 2) the day we spent at Hamley’s toy store and building fairy houses in Hyde Park. 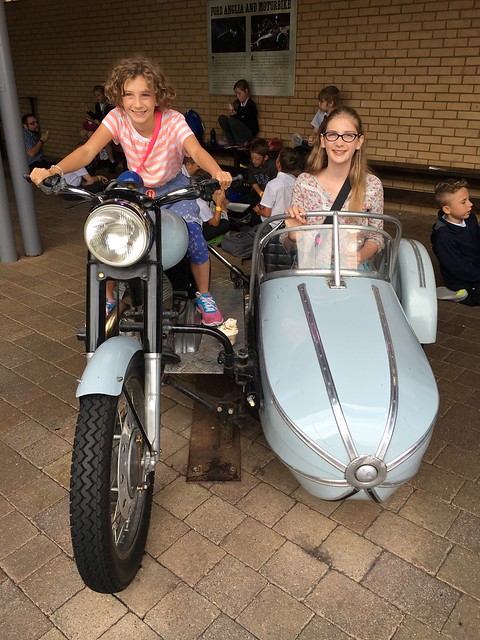 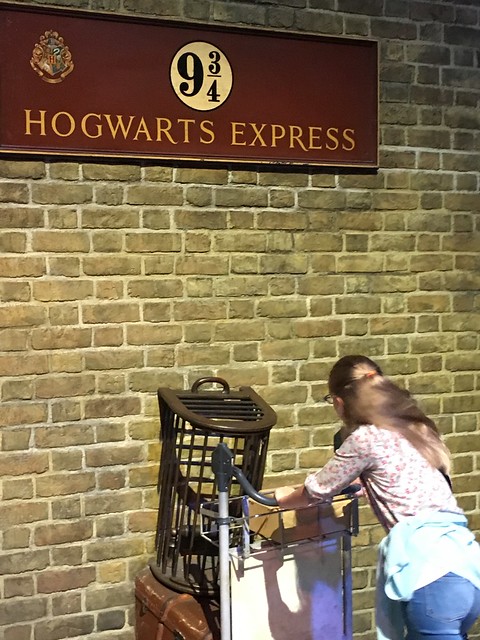 When Sam first saw the sticker price of a day at Universal Studios, he was going to give it a pass. But it was no more than a day at a studio tour here, or a day at Disney. 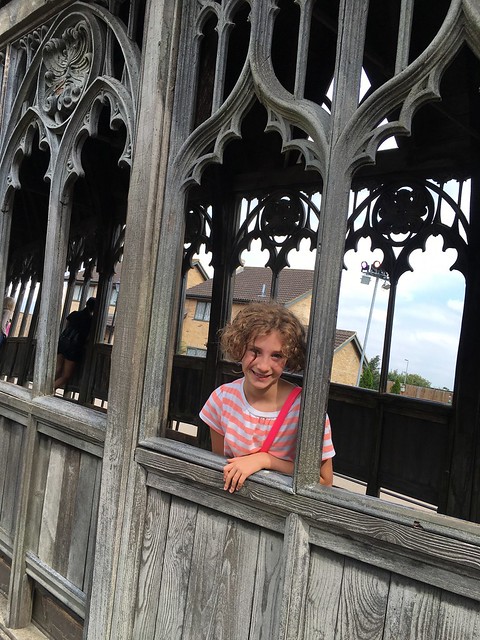 Phoebe is still hoping she gets a Hogwarts acceptance letter on her 11th birthday. 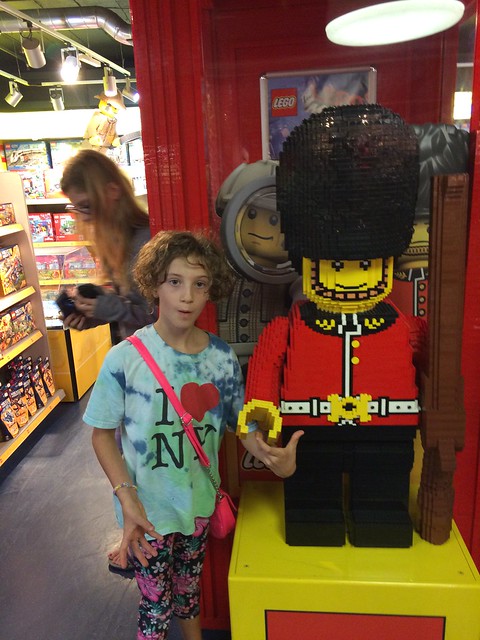 Is that a Lego photobomber right behind her? 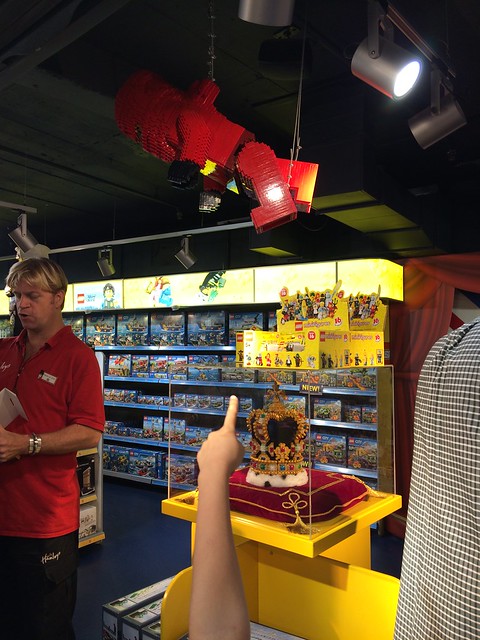 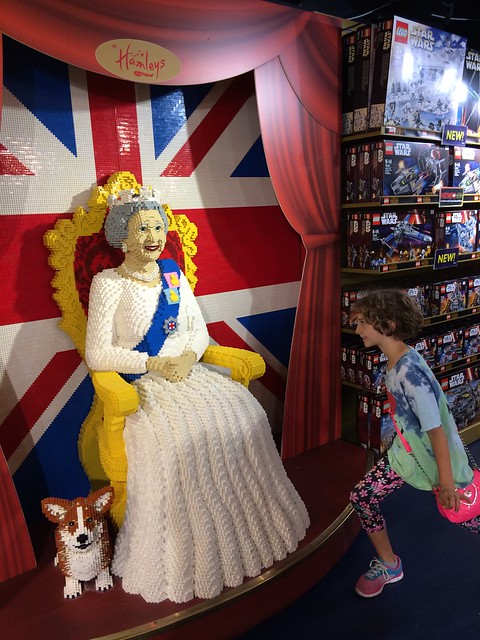 We spent several hours at Hamley’ and the girls didn’t buy anything.  When we went there years ago (I was 10, I think?), I felt like there were all sorts of toys I had never seen in the US.  Now, everything there was the same as what we see here: Legos, Playmobile, glitter nail polish, the same franchises of stuffed animals.  (Except for the Lego displays, which were uniquely British.) 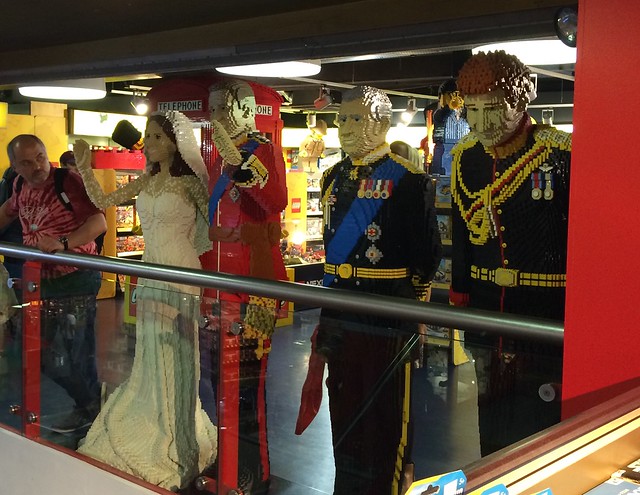 I’m going to share a little series of posts on our recent vacation. Whether you’re visiting here because you googled “London vacation” or “traveling with kids,” welcome! 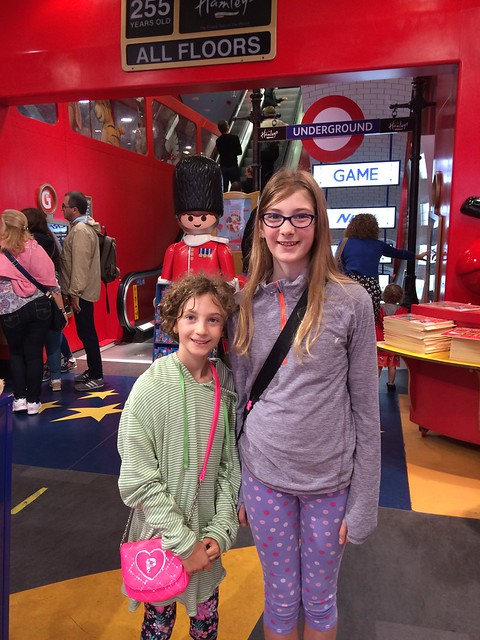 London is a fantastic city, easy to navigate on public transportation and great for walking.  Here are my tips for planning your trip.