I don’t know what I was thinking, waiting until the middle of December to begin knitting five hats.

Three have gone quickly, but the other two (for the girls) I planned in this sock-weight yarn, with a fiddly lace pattern. 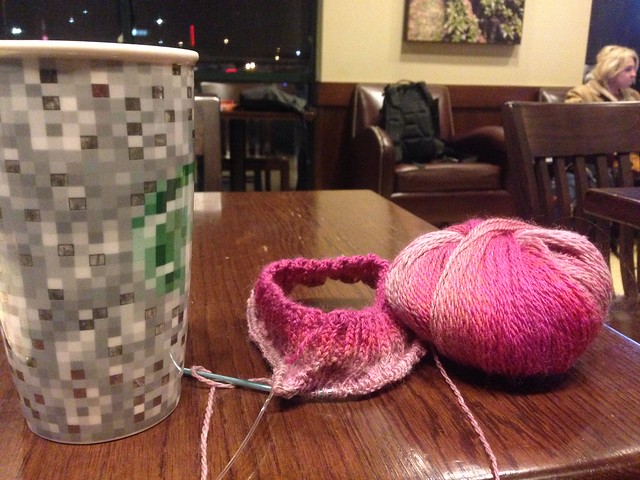 Here I am during dance class, knitting at the coffee shop.

It would go much better if I could count. 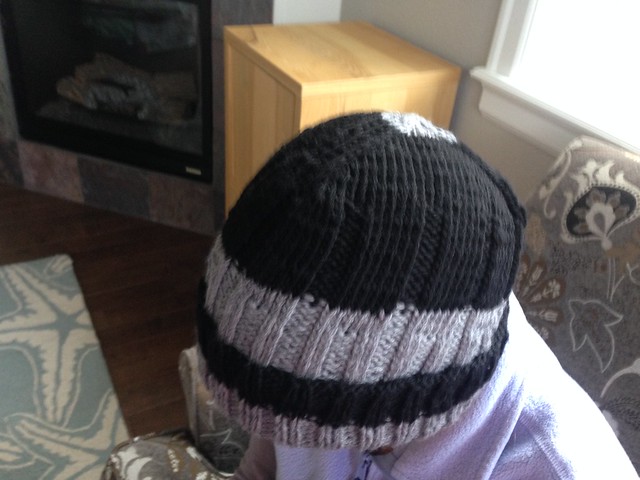 A finished hat.  Number two, actually. But now I can’t find where I hid #1. So maybe I’m down to two finished hats? 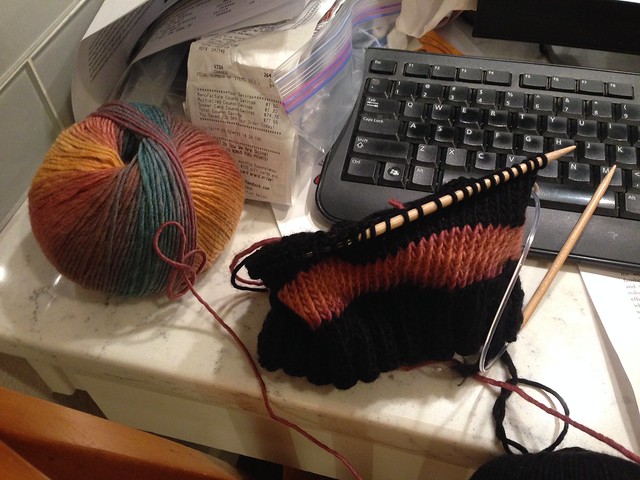 I’ve been watching reruns of the 2012 Summer Olympics as I knit. Watching all those super-healthy swimmers (go Rebecca Soni!) and runners (Wow! Tirunesh Dibaba’s 10K medal!!) It makes me feel speedy. Especially the men’s 2008 4x100m free relay.  And I’m sure that all the records and splits Rowdy Gaines is quoting the whole time has nothing to do with my inability to count to four as I knit.

How’s your crafting? Are you going to make it? 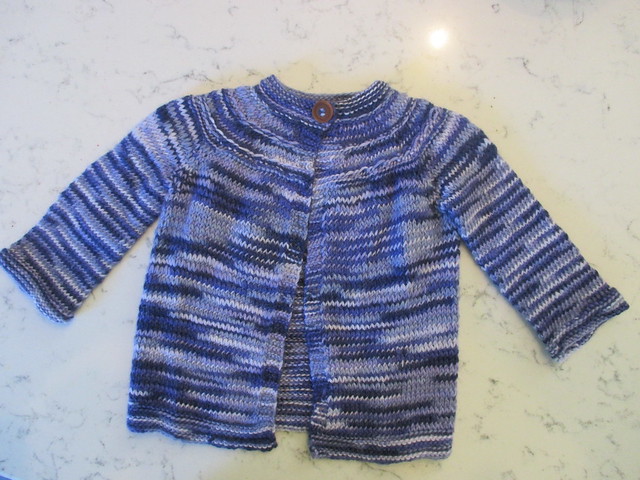 The yoke of the sweater was confusing; several times I frogged it and started over.  As the sweater grew, it became clear that I should have knit it on miniscule needles, because on the 7s I was using, it was not going to fit her any time soon.  The pattern I was using had several omissions… like the length of the sleeves and body.  It just said, “Knit until size desired achieved.”  Well, without a baby on hand to measure, that was all conjecture.  I pulled up my February Baby Sweater pattern to give me some idea of how to proceed.

She arrived safely.  The sweater was nowhere near done.  Having missed the first deadline, I put the sweater away for a while.  Nine months later, I dragged it out again for some road trip knitting.  I finished the knitting but forgot to bring a needle to weave in the ends.

The new deadline was her birthday.  And by the skin of my teeth, I made it. Blocked, ends woven in, button on. Her little sweater went out to her birthday party and just fits.  Phew! 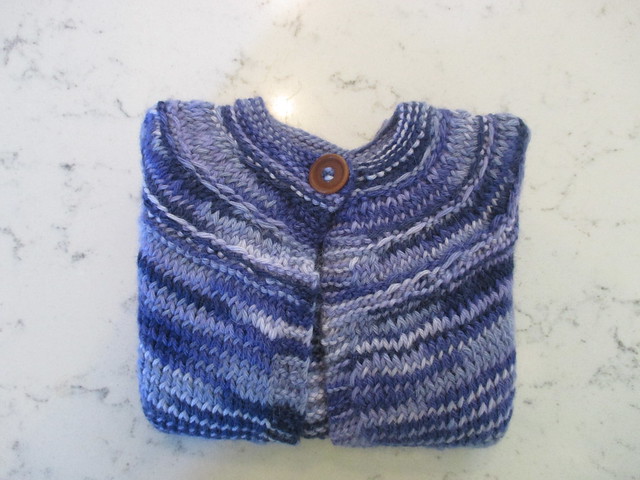 Happy birthday, sweet girl!  (Don’t think that because I finished knitting for you I am done praying for you. Not by a long shot.)

It’s Madelinetosh’s Tiny Tea Leaves. I love this sweater. SweetP loves this sweater. But every time she puts it on, it slips off her shoulder. Just like every other sweater I make.  There’s something wrong about how I do my gauge.

Anyway, she keeps trying to wear this sweater and then takes it back off again and puts it back on the hook.  So I decided to fix it.

First, I frogged it.

So that’s what I’m working on. When it’s done, I’m planning to cast on a spring sweater for myself. I’m sure it will be done just as the summer heats up.
What are you knitting?

Yes, this is how I roll: Christmas two weeks away, lots of gifts to be working on, and I knit myself a sweater.

I didn’t intend the purple-on-purple modeling plan, but when it was done I was very excited to show you all.

The yarn was disappearing quickly at the end– when I calculated the pattern adjustment, I forgot to multiply the skein requirement by 4/3 as well.  As it was, I have about 4 feet of wool left.

I’m super happy with the weight and the lack of sleeves. Now I can be warm without my ubiquitous fleece vest and not worry about getting sweater sleeves wet in the kitchen.

My best time for knitting is during a road trip (this time was to Chicago for Thanksgiving).

I always make it harder than it has to be– usually by not checking my gauge. This time I didn’t make the time to check my needle collection before we drove. I just shoved all my needles in the car and started my gauge swatches on the highway.  Somewhere in the middle of Nebraska, I realized that I didn’t even own the right needles for the project.

No sweat!  I am creative! I can do math!  I measured my gauge on the needles I had with me and converted the entire project by a factor of 4/3 and began knitting. [cue ominous music]  After I frogging it all after 32 rows which failed to resemble the pattern in any way (and frogging another 16 rows the time after), I realized that my math had rendered a pattern of an odd # of rows into a pattern of an even # of rows.  = disaster.

Take three was the charm.  I modified my calculated pattern and began again, this time with much trepidation and many fewer miles to knit.  Good thing it’s so far to Chicago.  I’m about halfway now, though the yoke is the only part where the pattern mattered, and now it’s just knit, purl, and decrease.  I should finish by 2015.

Here are the two hats that DID get finished.

What are you working on?

Or, perhaps… what’s NOT on the needles?

I’ve been wanting to get back to my knitting.  It seems to be the only activity that can induce me to sit with my children through a movie, and as I haven’t been knitting, Sam has been holding down the “movie-night” fort alone for quite awhile.

I’ve had Shalom on my mind for a long time but haven’t wanted to fork up the cash for the yarn.  I have a sweater whose wool I love but whose size (or shape?) I don’t, and looking at the pattern again, I became inspired to salvage the yarn.  After half an hour of ripping seams (and according to this tutorial, they are all BAD SEAMS) it became apparent all I was going to get were 1000 yards of yarnlets: 1000 1 yard-long pieces of ramen-like yarn.   I have made about 300g of them into a ball full of knots… perfect for something, but not my sweater.

Then Sam reminded me, “It’s not just another sweater.  It’s your hobby.”  As if that justified anything.  But I ordered a delicious dark purple bulky that just arrived.

SweetP chose this pink ages ago for herself (and a cool variegated one for M) and I finally cast it on.  The weekend’s swim meet was the perfect time for a little knitting.

I have more acrylic (I know, but the children don’t like wool on their necks) for M’s soon-to-be neckwarmer.  (Shh! It’s a surprise!)  I wasn’t going to knit for St Nicholas Day this year… I figured the kids were tired of handknits.  But then two of them independently reminded me that St Nicholas’s Day was coming up and they’d be receiving knit items… ahem.  Had to get cracking.

My friend Ruth was up visiting and went through the bag that is J’s micro-triceratops (the worst UFO ever).  She thinks I’m “so close” and that maybe all I need is a 14 hour road trip to whip it out.  I’ll let y’all know how that goes.

And for O?  Hard to say… he’s so warm-blooded he hardly wears what I knit him.  But maybe a little bag for the things he keeps misplacing?  With a cool button?  He might go for that…

What’s on your needles?  Anything for the holidays?

I had the crazy idea to knit baby hats for the women delivering babies in my Centering Pregnancy group.  Sam kept reminding me that I have a LOT of these groups, and it would be a ridiculous number of hats.  (From my perspective, that was sort of the point.)  So during Holy Week, I was frantically knitting baby hats.  Cute, no?

We had the baby shower on Easter Monday, and none of my patients were excited about them. Sam wins. I won’t be doing that again. But I thought they were cute. (And they were in this really soft natural organic cotton… I’m sure I’ll knit with it again.)

Take two: M was invited to a birthday party with friends who have American girls. “Could you make them some doll clothes?” she asked. So we did.

First up, the sweatshirt.

I traced Julie and added a half-inch on every seam… and the stupid thing is nowhere near fitting over her head. So take three: skirts. Because every American girl needs a denim skirt and a lightweight summer swirly skirt, no?

You’ll be thrilled to hear that the red sweater is done, and after this post you never have to hear about it again.

Remember the red sweater?  It was my Knitting Olympics sweater.

The sweater that was so huge on me I finally frogged the whole thing and started over?

That was really a low point for my knitting career, but I’m so glad I did it. Last month I was knitting at my friend Ruth’s house, and we spent a while looking at what I had left to knit (two sleeves and the button bands) and the wool I had left (three small balls) and weren’t sure I was going to make it. Happily, I found another two miniscule balls (like 8 rows of sleeve on each one– not much!) and just made it with scraps to spare. For a moment, I thought I was going to have to use the ends I trimmed (after weaving them in a bit) to finish the button band.

But it fits well, and I love it, and I enjoyed the yarn as much the second time through as much as I did the first.
Do you have a Finished Object to show off?

Just in case donating SOAP didn’t get you excited…

Handmade Homeschool is encouraging us to knit/felt/crochet a million squares for AIDS orphans in Africa.  Pass it on.

It was a project similar to this several years ago that connected me to Haiti.  Soulemama.com had sponsored a project to turn T-shirts into baby hats for newborns.  We made a handful at our house, but it set me praying for Haiti.  Look where that has led.

So if you’re inclined, let’s join Sarah at Handmade Homeschool and knit a square!