I spent rest time this afternoon wrapping up books.  Not just any books. Christmas books. 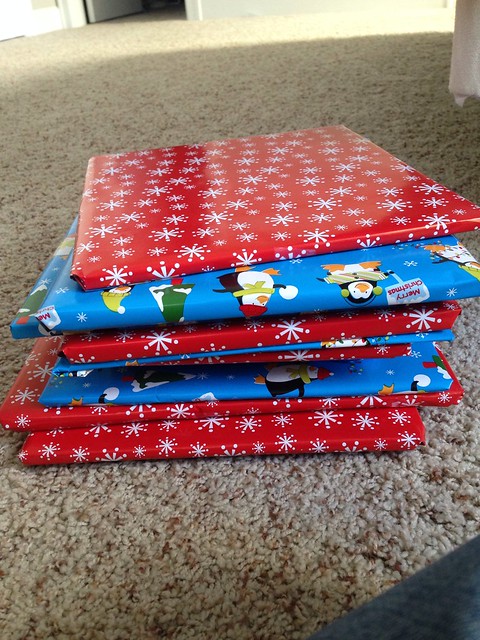 My friend Christine gave us one of her favorite Christmas books before my oldest was even born– it must have right after I told her I was pregnant.  And with that gift, she started us down a road of piecing together our Christmas book library.  Little by little, year by year, we have added to the collection.  It seems frivolous, to have a box of books we only read in December, but it was the box we missed most last year when all our Christmas ornaments and decorations (and books!) were in storage.

Yesterday at church, my friend Gabs was asking my about our Advent wreath.  (It’s this one, in case you’re looking for it.)  But we use our books as a type of Advent observance, too.  Slowing down, gathering on the couch, unwrapping a book each night, and snuggling together to read.

So today I hauled the box of Christmas books off the shelf in the basement and began wrapping them.  The plan (alas, if I could only stick to the plan!) is to open one each night and snuggle together as we read.  I know just which ones my kids will look for, weighing the books in their hands and trying to see through the paper.  (How the Grinch Stole Christmas and The Best Christmas Pageant Ever are two of their favorites.  I will be especially happy when we unwrap A Child is Born and The Shoemaker’s Dream.)  This year I’m adding a few more I’ve been looking for: a version of the Christmas Carol that’s been out of print, and The Baker’s Dozen.  Most of the books I have bought used, and we have imagined them in older, now grown-up hands before us.  The first few years I bought blindly and found some lemons, but now I am picky.

Like Mother Like Daughter, Modern Mrs. Darcy and Elizabeth Foss have lovely lists of Christmas books, but I’ll share here a few that didn’t make it onto theirs:

The Oxford Book of Christmas Poems (ed. Harrison & Stuart-Clark)- poems for Advent, Christmas and Epiphany, as well as winter.

Several bloggers (who all have blogs with fantastic names!) have reviewed Let Us Keep the Feast: Advent and Christmas and are hosting giveaways.

So if you’ve wanted to check out the book, here’s your chance: La Strada Tostada ‘s review.  Click on over there and enter a comment to win (closes Thursday night).

And wait!! One more from Life of a Catholic Librarian.

So now that Halloween (my least favorite holiday ever) is over, my observant children are noticing Santa everywhere.

I have an uneasy relationship with Santa.  I was a little creeped out by the radio show in my town that gave a blow-by-blow of the UFO/sleigh sightings across America on Christmas Eve.  If he was so great, why did he only show up one night a year?  Of course, he did bring me the teddy bear I slept with every night from the time I was five until I was … wait–how old am I? I think I just had a birthday. Forty-three. Where was I?

For a long time, I was determined that his name would not be mentioned in our house.  Like Voldemort, only nocturnal.

And then it turned out my kids were way smarter than I was, and they could handle the world of make-believe AND the world of reality side-by-side.  They were pretty sure someone who showed up just once a year to drop presents in their socks wasn’t real.

Some days I am afraid the barrage of Christmas marketing is going to make me loathe Christmas as much as I loathe Halloween.  That would be a tragedy, because I truly love Christmas:  the miracle that God would come to be a person with sweaty skin and bad breath and bed head.  (Manger head?)

So there we were in the grocery store, and Owen asked, “What about Advent?  Did we skip Advent this year?”

And that was a double-take: my children noticed Advent.  As if it weren’t just a way to get more days of elf on the shelf candy and a terrible countdown of how rapidly Christmas is approaching and how I’d better get everything bought before there aren’t any more widgets or iGadgets or any more 18-inch doll paraphernalia left on the shelves.

While I’m on my fast-approaching the end of the year rant, can I talk about the pressure to take a perfect holiday photo?

I was taking a walk in the park with a friend last weekend, and we kept tripping over photographers taking photos of families wearing clean, coordinating clothing under the golden trees.  I used to try to get a good photo of all of us. Granted, I never actually hired a professional photographer, which apparently is the only way to get a decent photo.

(Of course a perfect photo is so much more representative of our family than all those hundreds of other photos I take all year long, with messy hair and dirty clothes and half of Moriah missing because she was dancing when I snapped the photo.)

Instead, I would beg a friend with a good camera [read: camera with interchangeable lenses] to take photos of us one afternoon.  (Remember when we had to buy FILM?  And worse, DEVELOPING?)  Invariably someone would be sick and the only photo in which everyone was looking at the camera would have snot dripping down someone’s face.  (For clarification: usually it wasn’t my face.)

There was the year Jonah climbed up the dresser I had neglected to fasten to the wall, resulting in a black eye and gash on the nose. Another year I was determined to take a photo of my children in front of the Chagall windows at the AI and Owen wouldn’t even get in the photo, let alone hold hands (see above). And then there was the year I told the children I wouldn’t let them get back in the car until I had a photo of everyone smiling.  (It was so cold I finally made do with everyone smiling, but one little elf looking sideways at her brother.)

(Okay, this one wasn’t even attempting to be a holiday photo. It’s just an example of a beautiful photo ruined by snot.)

One year we took photo after photo at the beach in our matching collared shirts and shorts.  I kept scolding one of them (probably poor Jonah again) for looking sick, and then all of a sudden he yakked a gallon of vomit onto the seagrass at his feet.  (Sorry I can’t find that one to post for you.)

I don’t want simulated perfection this year.  I don’t want the blow-up Santa or the pressure of making the perfect card I saw on pinterest or the illusion that someone magical is going to put the ideal gift in my monogrammed stocking.

Furthermore, I apologize if any of my previous attempts in manufacturing perfect have made you feel bad about the messy, true miracle that is your life.

This year I want Christmas, the real deal.  God Incarnate.   “And without controversy, great is the mystery of godliness: God was manifested in the flesh, justified in the Spirit, seen by angels, preached among the Gentiles, believed on in the world, received up in glory.” 1 Timothy 3:16

And I want the miracle 365 days a year.  The real, the action shot.  I want the whole mystery fleshed out in my life.  God was far; he came near.  He touches me every day and speaks into my mess, my inadequacy, and my brokenness.  Great is the mystery.

It’s that time of year: when we start to think about Christmas and Christmas gifts.  If your mind is heading that direction, this is a beautiful book with step-by-step instructions for making historical ornaments, all modeled on early American ornaments found at the Abbey Aldrich Rockefeller Folk Art Museum in Williamsburg.

The photography is wonderful, and the “What You Need” lists are comprehensive with not only the consumables, but the tools as well.  You won’t be caught unprepared in the middle of a project.

What I especially like about the book is the note about each of the historical objects, the artist(s), and the creative suggestions for making each project your own.  It’s clear that Jan Gilliam (associate curator for toys at the Colonial Williamsburg Foundation) and Christina Westenberger (assistant manager for education for the Colonial Williamsburg Foundation) know their stuff.  The projects vary widely, from punched paper to aluminum stars to cross-stitched miniature pillows.  My favorite projects are the felt birds and the Scherenschnitte birds.

Disclaimer: Christina, an old friend who sang at our wedding, sent me a copy of the book last Christmas, but all opinions here are my own.