One: This is NOT the SQT where I will reveal where my oldest is going to go to college for the simple reason that he doesn’t know yet. So there. However, this IS the SQT where I will diss bitterly on all the ridiculousness that this process has entailed. You’re welcome. 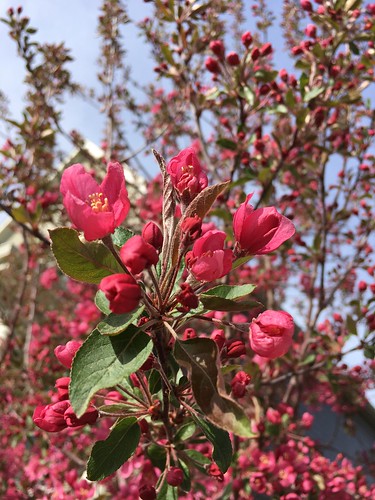 Two: Remember back in October when we visited my alma mater and a whole bunch of book stores? Well, that school and a whole bunch of the others filled more than 50% of their spots in “Early Decision” (aka in November). Consequently, there are very few spots open for everyone else later.

Three: There are three options for applying, and the process is different from back when I applied. Here’s my primer on applying to college.

As a side note, I just read an article in the Wall Street Journal which says the DOJ is looking into whether Early Action violates anti-trust laws.

Four: Then there is Early Decision, which is like getting engaged. You only ask one school to marry you, and if they say Yes, you’re done in December as long as you can afford the school that you chose. If you can’t afford it, then you have to break that engagement and move back into the regular dating pool with everybody else.

Five: The rest of America’s 17 year-olds apply with Regular Decision in January and February. With great relief, they hit send on that last application and think they’re done until May 1, when they’ll have to make a decision. But they’re not actually done, because there are Intentional Learning Communities (I’m not making this up) and scholarships and dorms and research fellowships with their own applications and essays and deadlines that just keep coming. The students aren’t really done… and now they’re mad. They’re like the Bachelor who’s back on the show after an earlier stint as one of the many candidates hoping for a rose and then came back as the Bachelor but broke his last engagement and knows America hates him but is really sure he’s going to find love this time around.

Six: I think the nail in the coffin of this process for my son was a prestigious private school that invited him to apply for one of their Intentional Learning Communities that came with a scholarship. He wrote three extra essays and then, after about 6 weeks, received a letter addressed to someone else, “Dear Lauren B., we’re sorry that we have to inform you we can’t give you the scholarship…” He emailed back to say, “Hey, I’m not Lauren B.. Can you check on my application?” To which he received an email reply, “Okay, we looked and you didn’t get it either.”

So that school is off the list. (The more schools that behave badly, the easier it is to choose!)

Six: We’re currently down to two schools, one of which we will visit for the first time this weekend. He is an alternate for an Intentional Learning Community (see, this actually is a thing at multiple schools – I’m not making it up) but will only get that spot and scholarship if the first choice cis- white male (CWM) with a smidge of Mexican backs out and goes somewhere else.

Seven: So, with 10 days left before the deadline to choose, our current decision algorithm looks like this: 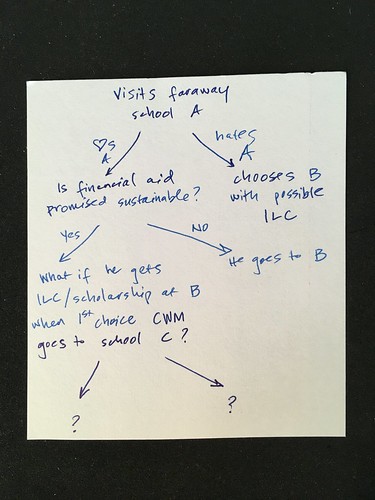 Really, this is just like the Bachelor. With lower ratings. Stay tuned.

For more Quick Takes, go check out Kelly at This Ain’t the Lyceum!