One: This is a photo of my daughters mummifying a chicken. 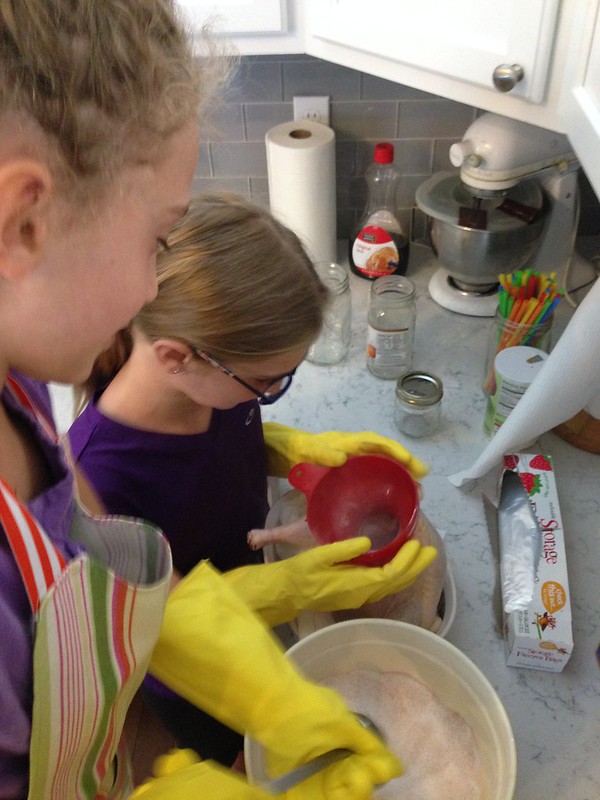 It’s the third time I’ve done this.  First, we did it when Jonah was 5 and we’d just begun our study of ancients history.  He has no recollection of it.  My recollection was very hazy until I realized that I’ve made the exact same mistake 3 times now.

What I should have done was mummify a Cornish hen, because the chickens they sell in the grocery store these days are enormous and a) require an incredible quantity of salt and spices to suck all the liquid out and b) don’t fit in standard freezer bags.  Which means I lasted 4 days before I couldn’t take the smell and had to throw the rotting carcass away. 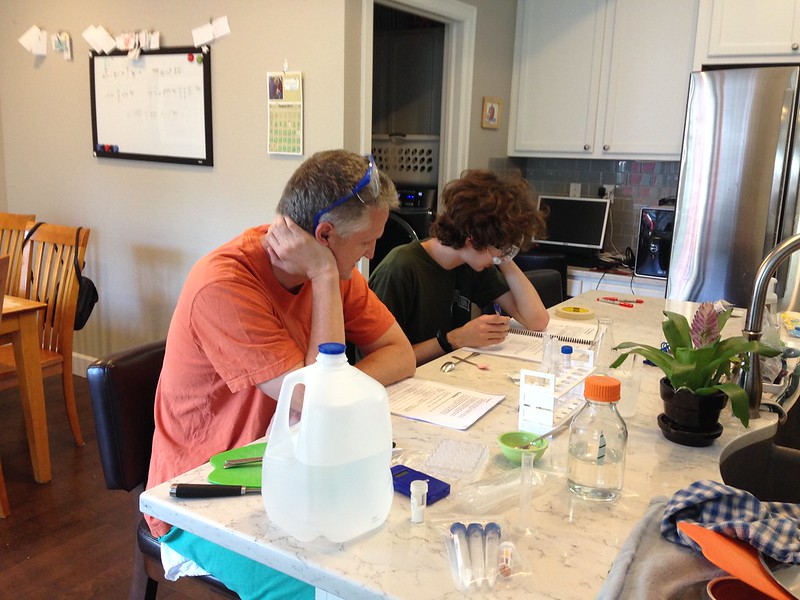 After watching me freak out for several weeks, my kind husband tentatively asked, “You seem really stressed out. Would it help you if I took over the laboratory portion of AP biology?”

He didn’t have to offer twice.  And let’s be clear: of the two of us, he’s much better qualified than I am.

Three: Did I mention I hate having stuff all over my counters?  My fantasy kitchen is spare and bare with empty counters and wide expanses of space.  But alas, we have to eat, so my counters are covered with food.  Right now I’m trying to figure out what to do with the many lovely tomatoes we received from our CSA over the past two weeks.  (I’ve been eating them every day, but I’m the only one in the family who will.)

Five: This is her other experiment: sodium bicarbonate crystals. 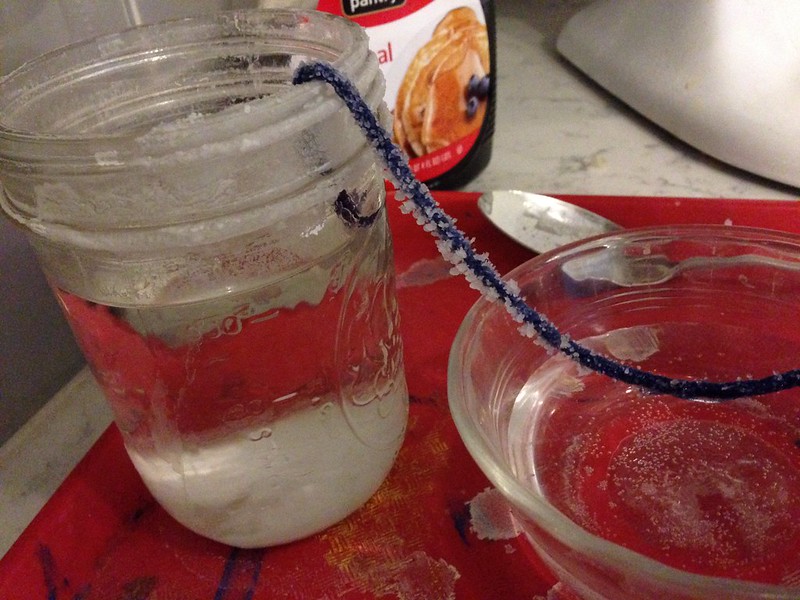 She begged and begged and I said no and said no… until I realized I was telling my child she couldn’t do science because I wanted a clean counter.

Maybe I’m not actually cut out for this home school gig after all.

Six: Amongst the bag of tomatoes (what, you don’t keep your tomatoes in Athleta bags?) and Sculpey creations (that’s a giraffe eating from a tree) and rice is a bag of moldy cheese.  On Monday I took all the moldy cheeses (last count: 5 types) out of the fridge so we could look at the different molds under the microscope… but we haven’t gotten to it yet. 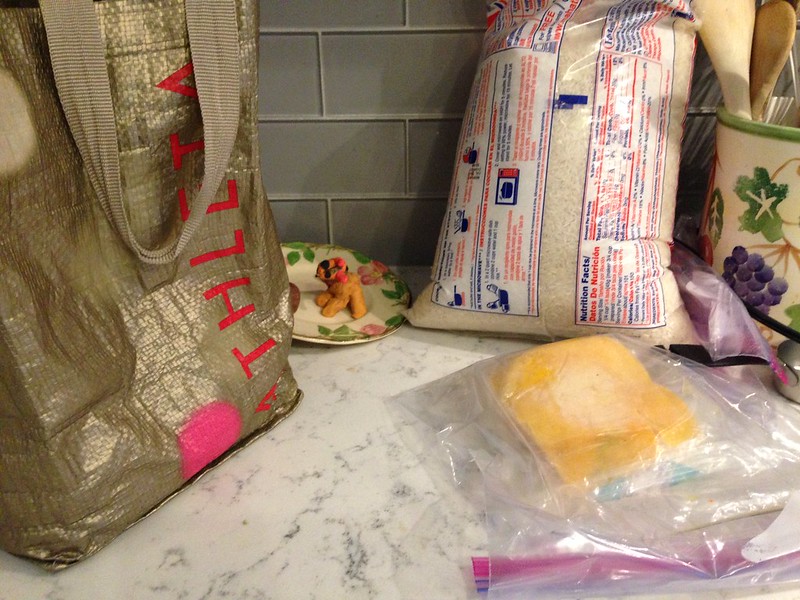 Seven: the other experiment is to see how long I leave that bottle of fake “Original  syrup” we inherited from a pancake breakfast on the counter before I can’t take it any more and throw it away. 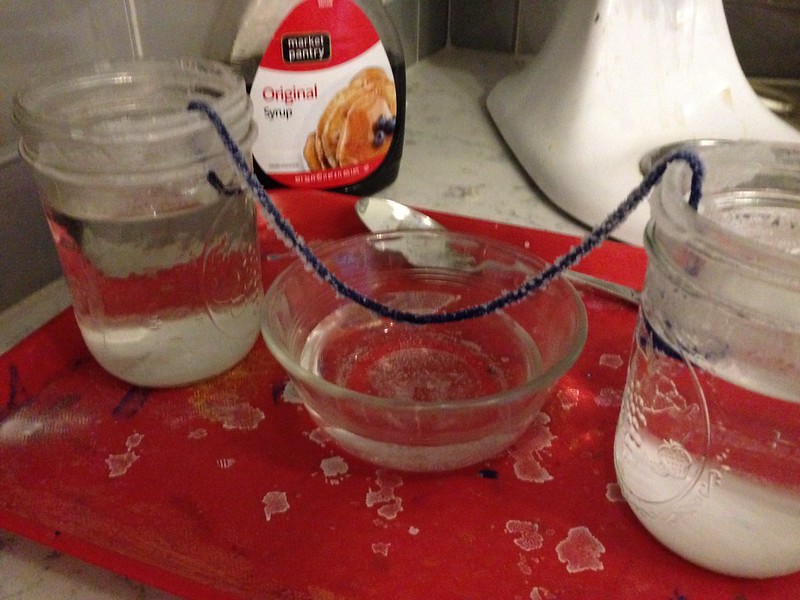 Wait- I have an idea!  We could do an egg-osmosis experiment to see which direction the fluids run through the permeable membrane if we soak an egg in corn syrup…

We’ll see if I can capture a photo before it explodes.

For more Seven Quick Takes, check out This Ain’t the Lyceum.

2 thoughts on “SQT: the kitchen laboratory”