I would describe our homeschool curriculum as inspired by Charlotte Mason: we focus on living books and narration. But since Charlotte Mason taught 100 years ago, I have to say I was daunted when we came to the 20th Century. I had to make my own booklist.  Here is a selection of our choices from this year, described by topic and the age of the child(ren) who read them.

On the subject of Reconstruction and the condition of freed slaves, we recommend Elijah of Buxton (Curtis).  I read aloud Ann Manheim’s biography James Beckwourth, Legendary Mountain Man.   We started Jarvis’s Moccasin Trail at the same time, but biography caught our interest more, and we gave up on the Jarvis book.  One of our favorites, Little Britches (Moody), fits well into this time also.

We learned about workers’ conditions after industrialization. On this topic, my high schooler read both Paterson’s Lyddie and Sinclair’s The Jungle. Newsies (the Disney movie) is a good AV supplement to this topic.  Our middle schoolers listened to an audio recording of Giff’s House of Tailors (on CD) which describes the European difficulties which drove immigration and the immigrant experience here.  My high schooler read Pearl S. Buck’s The Good Earth, which describes conditions in China during the same period.  Another favorite read-aloud about immigrants (and the Titanic) during this time was The Watch that Ends the Night (Wolf).

We spent time on Woman Suffrage.  Our favorite books on this topic were You Want Women to Vote, Lizzy Stanton? (Fritz), I Could Do That (White), and Heroine of the Titanic, The Real Unsinkable Molly Brown (Landau).  We visited the Molly Brown House here in Denver and enjoyed the museum’s documentary and tour. 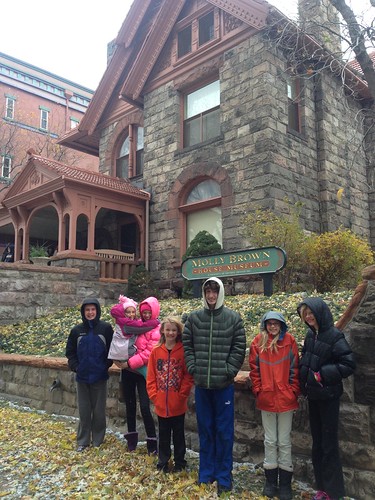 For high schoolers who like science, I recommend Gina Kolata’s Flu and John Rigden’s Einstein 1905: The Standard of Greatness.

Continuing in the 20th Century, Lansing’s Endurance: Shackleton’s Amazing Voyage (available on audio) is a vivid adventure book about his South Pole journey in 1914-7.  The book fits right in with our WWI reading, which included Remarque’s All Quiet on the Western Front (for my high schooler), Harris’s The Fledglings, The Professionals, and The Victors (about the nascent Royal Air Force), and The Road from Home (Kherdian) about the Armenian genocide.  Facing History has great resources on the Armenian Genocide, including a curriculum of discussion questions based on primary documents.  We loved the audio of Listening for Lions (Whelan) which takes place in Africa during and after the 1918 Influenza Pandemic.  Porter’s Pale Horse, Pale Rider is a vivid portrayal of the pandemic for high school and older.

We relied on both Mike Venezia’s entertaining picture-book biographies and David Adler’s more serious ones for the presidents.  Robert Burleigh’s biographies of Amelia Earhart, Henrietta Leavitt, Jackie Robinson, and Babe Ruth were a good addition to our reading.

We enjoyed several books on The Great Depression this year.  Esperanza Rising (Ryan), Out of the Dust (Hesse), and A Letter to Mrs. Roosevelt (De Young) were all good for my middle schoolers.  McGinty’s Gandhi: A March to the Sea and Kimmel’s A Taste of Freedom: Gandhi’s Great Salt March are both beautiful and informative picture books.  High schoolers might also enjoy Seabiscuit (Hillenbrand) and The Boys in the Boat (Brown).

We spent a lot of time on WWII.  My high schooler read Code Name Verity (Wein) and Unbroken (Hillenbrand).  My middle schoolers read The House of Sixty Fathers (Dejong), Sadako and the Thousand Paper Cranes (Coerr), and The Upstairs Room (Reiss) and Navajo Code Talkers (Santella).  We read aloud Number the Stars (Lowry) and The Endless Steppe (Hautzig).  Our unanimous favorite read aloud was Steve Sheinkin’s Bomb: The Race to Build- and Steal- the World’s Most Dangerous Weapon.

On the Civil Rights movement, we really enjoyed Weatherford’s books The Beatitudes: from Slavery to Civil Rights and Freedom on the Menu: The Greensboro Sit-Ins. The Bus Ride that Changed History: The Story of Rosa Parks (Edwards) is very accessible for elementary-aged kids. For high schoolers, I recommend Hansberry’s A Raisin in the Sun and To Be Young, Gifted and Black; Beal’s Warriors Don’t Cry and Curtis’s The Watsons Go to Birmingham.  The Immortal Life of Henrietta Lacks (Skloot) is a brilliant blend of science and the history of race relations in the 20th century and best for high schoolers.  Sheinkin’s Port Chicago 50 details the effects of segregation in the armed services and would be appropriate for all ages.

We wrapped up the year with a unit on the Cold War.  I read aloud Rocket Boys (Hickam) (with a few edits of high school libido my youngers didn’t need to hear), and the kids begged for it.  We watched War Games, the Hunt for the Red October, and White Nights.  Countdown (Wiles) portrays the Cuban Missile Crisis so well at a middle-school level. Schmidt’s The Wednesday Wars and Okay for Now have taught my kids about the Vietnam War and have generated so many great discussions.

We only hit a couple off my list of titles (mostly fiction) that portray the international situation in the 20th Century, but I recommend Tasting the Sky by Barakat (Palestine), Revolution is Not a Dinner Party by Compestine (China), Paton’s Cry the Beloved Country (South Africa), Park’s Long Walk to Water (Sudan), Paterson’s Day of the Pelican (Bosnia), Choi’s Year of Impossible Good-byes (Korea) and Kadohata’s A Million Shades of Gray (Vietnam).