Pretty: Here is the table set before Thanksgiving dinner. 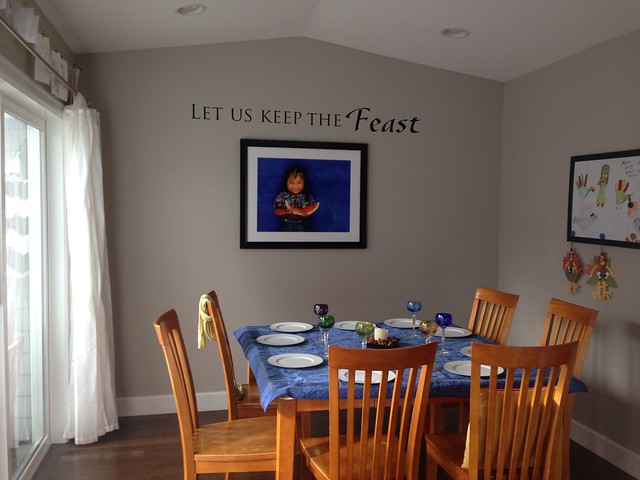 Here’s the other table, which we squeezed next to the couch. Sam had the brilliant idea to cover the couch with a sheet so that nobody accidentally wiped mashed potatoes or cranberry sauce on it. Hooray. 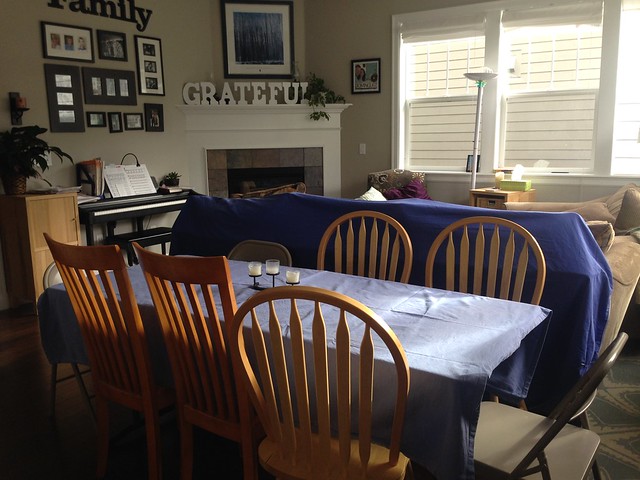 Happy: This is the first Thanksgiving we’ve hosted in… well, maybe 18 years? It was so much fun! I pulled out a turkey recipe I made with my roommates during medical school. 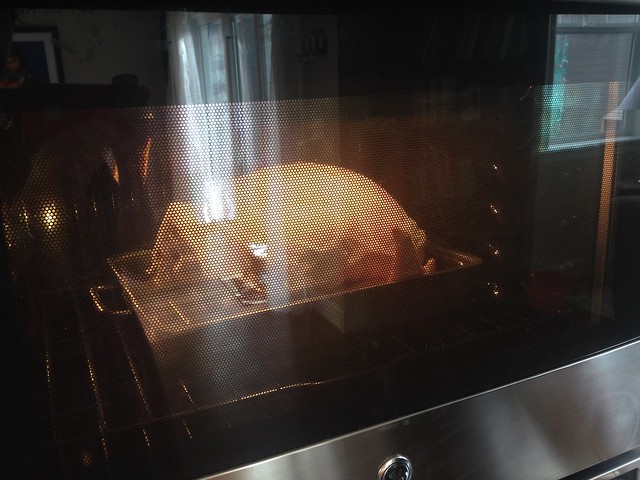 That’s a cheesecloth soaked in wine and butter (my recipe had no quantities, so I used a stick of butter and a cup or so of wine) on top of the turkey in a 450 degree oven to brown it. Then reduce the heat and cook until the red timer pops up. It was good. 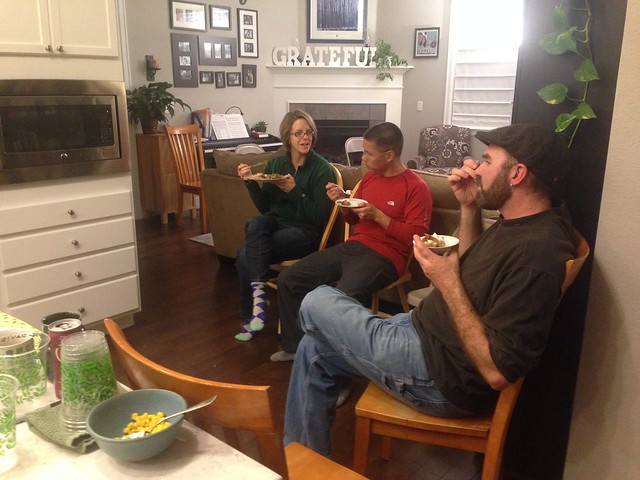 Of course I only have photos of dessert. The girls made these Salted Caramel Cheesecake Bites, Sam made “Grandma Judy’s Jello” and my friend Pam brought an awesome pumpkin pie. 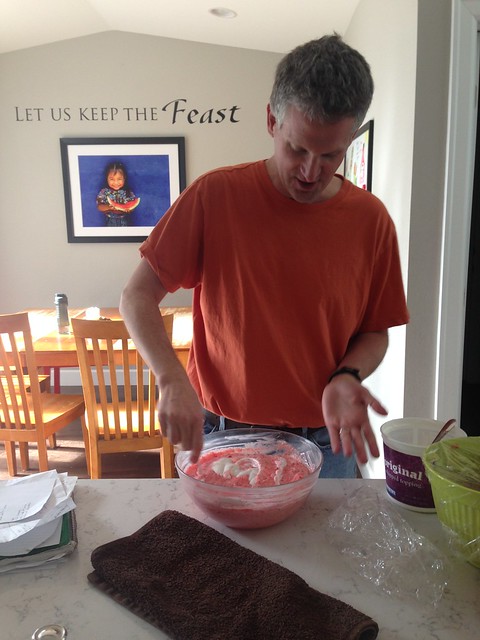 Funny: My kids’ favorite Thanksgiving tradition, apart from the aforementioned jello and seeing their cousins (which I couldn’t recreate this year), is playing “The Character Game.” We played it Thursday with all our guests, Saturday morning with friends we hosted for brunch, and Saturday night at the party we hosted for our children’s church volunteers. So I hope they got enough of it for a bit. Here’s how you play:

Each player chooses character (you can say “any animal” or “a historical figure” if you want to narrow things down, but “any character, real or imagined” works just as well) and tells the name in secret to the Writer. The Writer compiles a list of all the characters and reads it back to the players twice. For example, “Vladimir Putin, Minnie Mouse, Elmo, Joshua, Sully, Luke Skywalker, Janice Joplin.” Nobody asks “Who is Janice Joplin?” or that name will stick in everyone’s head.

Once the Writer reads out the names twice, the guessing begins. No one acts our their character; instead, they want to give nothing away. I might say, “Jonah, are you Luke Skywalker?” If he is, he joins my team. Then our team becomes my character [still secret] and can put our heads together to use psychology and our awesome memories to figure out who everyone else is. The winner is the last person whose name is guessed correctly. The trick is 1) to remember all the names, and 2) to pick a name for yourself that is just ordinary enough that it doesn’t stick in anyone’s mind.  This is a great game for a group of people of varying ages, because everyone can play. Only the Writer (who doesn’t pick a name for herself but observes the play) has to be able to read/write. Of course I don’t have a photo- I was too busy trying to remember all the names!

After everyone left that night and I was putting the leftovers away, I realized I had never put out the cranberry sauce.  No wonder there wasn’t any wiped on the couch.

Real: The one thing I’m still looking for to finish the house are pendant lights for the kitchen over the island. My mom and I went looking at a lighting store on Sunday. Sam’s only advice was “Don’t buy anything without me.” 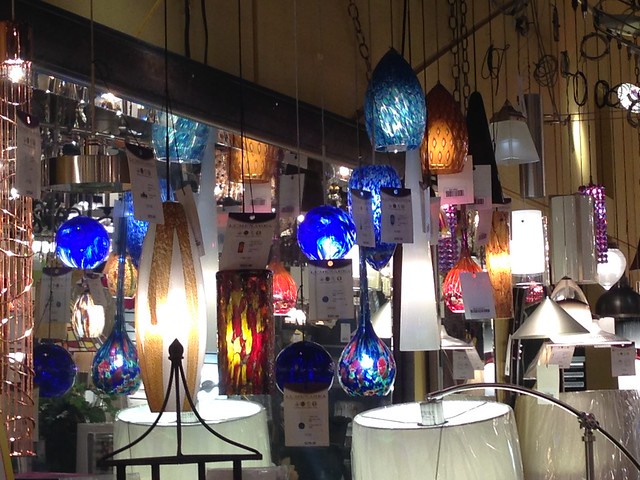 I saw the perfect thing hanging over a bar in Glenwood Springs during the summer. Thinking there might be a local glass blower or shop we could patronize, I went into the restaurant to ask where they got them. The hostess found the bartender who knew. “Venice,” he said. “They were hand-blown in Italy, and the owner brought them back in his luggage.” So much for that. 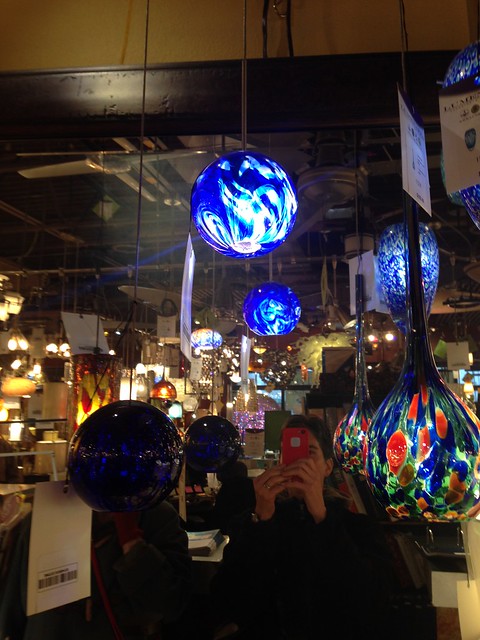 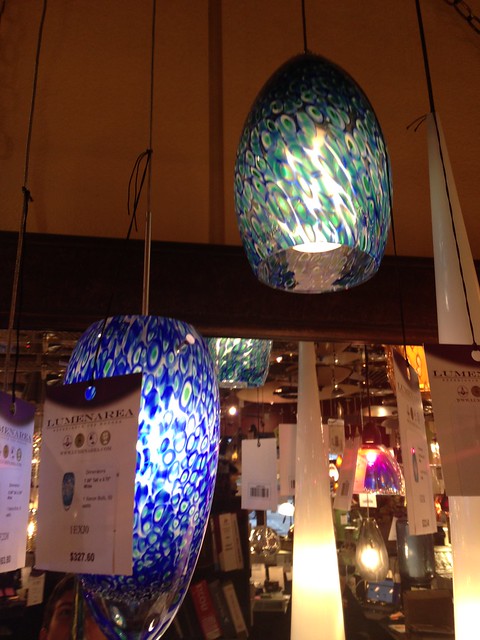 Lots to chose from, but nothing quite right.